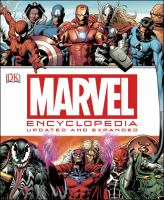 Also in this Series

In this library
Other Locations

General Note
Includes index.
General Note
"First American edition, 2006 ; reprinted 2008 ; revised 2009, 2014"--Title page verso.
"With"
the definitive guide to the characters of the Marvel universe.
Description
"Timed perfectly with Marvel's 75th Anniversary, DK's bestselling Marvel Encyclopedia is now fully revised, extended, and updated. Bring the Marvel Universe home with this all-inclusive encyclopedia detailing little-known facts and information about the iconic Marvel characters. This essential tome has been fully updated with 32 additional pages. Created in full collaboration with Marvel Comics, the revised pages of Marvel Encyclopedia now feature new entries on the latest characters and teams, updated facts on existing ones including their latest looks and story lines, and expanded entries on major superheroes such as Spider-Man, Thor, and The Avengers. Special double-page features have also been added highlighting recent major crossover events in the Marvel Universe, such as Fear Itself, and the new Marvel Now series."--Provided by the publisher.

Note! Citations contain only title, author, edition, publisher, and year published. Citations should be used as a guideline and should be double checked for accuracy. Citation formats are based on standards as of August 2021.